The Purple Rose of Cairo

A lonely Depression-era waitress Cecilia trapped in an unhappy marriage searches for escape of her drab life by going to the movies over and over. Much to her surprise, the young archaeologist Tom Baxter in the movie steps off the screen into her life, for real! Things get complicated when Gil, the actor who plays Tom, also jumps in this love triangle. Is Cecilia wise enough to make the right decision choosing between them? Or is it inevitably an illusionary fantasy? 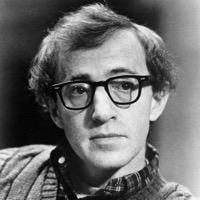 Born on December 1, 1935, Woody Allen is a screenwriter, film director, actor, comedian, writer, musician, and playwright. Allen's distinctive films, which run the gamut from dramas to screwball sex comedies, have made him a notable American director. For inspiration, Allen draws heavily on literature, sexuality, philosophy, psychology, Jewish identity, and the history of cinema. He has won four Academy Awards, including three for best screenplay and one for Best Director for Annie Hall (1977).